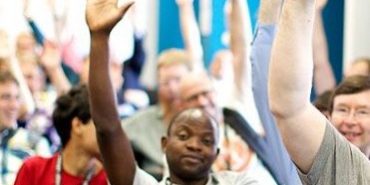 Democratic meetings should be a basic component of democratic societies. Why then is it so rare to find a democratic meeting that is run well? Whether it is at work, in associations, amongst neighbours or even amongst groups of friends, democratic decision-making is in a lamentable state. Let me give you a couple of examples.

Down in the Barrio

I was at the meeting of a Comunidad de Vecinos this week. These “communities” are far from what the name suggests. The community only exists because the blocks of flats that are such a common part of Spanish life have shared facilities, services and responsibilities. Every one of the neighbours has their own life to get on with and, although people say hello in the elevator or the stairwell, there is no particular social or emotional connection between them.

That does not matter. A democratic meeting exists to reconcile differences amongst people and to take decisions by majority vote in a community. Every year the presidency of the community rotates. In this particular building, which has nine floors, it goes from floor to floor so that, of the three apartments on each floor, one person has to stand forward to be treasurer and another to be president. These posts are not voted in; they are voluntarily taken.

It makes sense in the same way that Athenian democracy makes sense: everyone is included; there is no qualification of talent or experience; no one can “lead” for more than a year at a time; there is no remuneration for the posts so there is no temptation towards professionalisation or corruption.

Yet the meetings don’t work. They don’t work because the simplest of procedures that any child at Summerhill would be able to point out are not observed:

I have commented on how these things are done at Summerhill in other posts. The Chairman at Summerhill can only speak if she or he temporarily steps out of role. This is essential to the functioning of the Meeting. The Chairman controls the Meeting, gives it direction and purpose and separates, from the mass of information that people present, the essential: what is mere comment, what is a suggestion and what is a proposal.

In the residents’ meeting I attended there was none of this discipline because there was no chair. The people attending seemed to think that the only way they could be heard was to speak louder than the others. They said things that were irrelevant to the case being considered and there was a lamentable tendency for those with an axe to grind to steer each issue being dealt with back to their own egotistical concerns.

They did not have a proper understanding of the difference between making a comment and making a proposal.  This is not their fault: they just do not have the experience of working in that format.  Who is to blame them for thinking that the one who shouts loudest will carry the day?  It seems fairly evident that this is, in fact, the way that this particular meeting does work!

I don’t think this was an especially bad meeting because I have seen similar in other environments. I have been in work meetings, for example, where the explicit intention was to share teaching practices but where the director of the centre undermined her own intentions by interrupting, judging and summing up at the end. The sad thing is that this is what most people expect and they are not surprised by it. It is only when you have worked in a system where this kind of “bossiness” does not exist that you realise how insipid and counter-productive it is. It can lead to a Batesonian double-bind if the “boss” is one of those sloppy stern adults who wants to be liked and have everything go her own way.

On the other side I am thinking about the hung parliament that has resulted from the recent elections here in Spain.  It seems to me that if people have such a poor level of basic education in democratic processes there is little hope for democracy on a larger scale.  We will have the same sad parade of demagogues, would-be tyrants and macho “bosses” we have always had.  And we will deserve them.

One of the strongest arguments for democratic education- with all the concomitant extras, including equality, respect and freedom- is that it would just make life better if people knew how to arrive at decisions without conflict. When Neill suggests that Summerhill can change the world this is one of the ways that I am most fully in agreement with him.

If you have a democratic meeting that is not working, write us an email and we will diagnose the problem with you. It does not have to be that way. If children of all ages can come together and run a democratic community, you can as well.