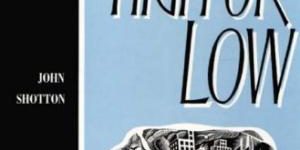 Jimmy Dick deserves to be better known.  He was a precursor of Neill, a Scot who started a school in Liverpool, moved down to the East End of London, got involved with Ferrer schools and married Nellie Dick who was a dynamic part of the Jewish diaspora culture there.  They ended up in the USA.  Internationalism was in the air in the early twentieth-century.

It is good to remember this right now.  I look at the solidification of national postures in the Brexit result or at Donald Trump wanting to build a wall against migrants.  I talk to the Hungarian volunteer who has cycled here from Budapest and tells me of the fence that Orban put up against immigrants.  I hear the voices of the regional nationalisms in Spain and see people weeping over the progress of the national football team.  Then I turn to No Master High or Low (John Shotton, LibEd 1993) and read this paragraph from Jimmy Dick:

The State carefully looks after the patriotic superstition that is nursed in school. . . . Very few children are free from this patriotic superstition and I think it is one of the finest methods of propaganda to let them know there are some who believe it is as bad as religious superstition.  We have suffered too long from that disease known as the ‘swelled head’, believing that a child does not think.  A child will think if we teach it to do so; but leave it to the mercy of the present school method, and it will grow up in a spirit of subserviency.

Dick talks about “national prejudices and patriotic piffle.”  He was writing in 1909.

Why is patriotism piffle?

Why is internationalism sane?

It is obvious that nation states want their citizens to identify with national ideas.  Pledging your allegiance, singing the National Anthem, adoring your Royal Family, learning patriotic rhymes or speeches, watching films that glamourize the military successes of your country, parading, chanting, honoring the brave few, sporting the national flag: these are all activities that would come under the category of patriotic piffle.  I suppose they bring people together in a crude, unthinking way.   But, in whose interests is it to have a nation?  Does it really make any sense to you as an individual?  Is there not a possibility that someone in Russia shares your ideas and interests even though your football teams are opposed?

My Hungarian visitor took the Camino de Santiago to Finisterre before coming here.  The Camino is the forge of internationalism as people from all around the world join together with a common destination, sharing, overcoming difficulties and helping each other out.  Some of them undertake the Camino with the most minimal resources.  One woman from the Czech Republic, for example, is five days from Santiago and has fifty cents in her pocket: her needs are met by her fellow travelers on the Camino.  I studiously avoid the word pilgrim because the motivations of these people are anything but religious although they do come to form a kind of church.  It is an international church which would bring a smile to the face of the Jesus of the gospels.  Men and women who “consider not…”  and are close to the sparrows.  The Camino is a good example of internationalism because there are hundreds of thousands of people having millions of uncontrolled interactions with one another that improve the world; they are not controlled by nation states, governments or bureaucrats.

When state ministers step in to “improve” the Camino they generally mess it up.

Patriotism, like the horrifying displays of violence that the English are known for when they travel abroad, cannot survive conversation, sharing and common purposes.  It thrives when people are separated, divided and encouraged to think in antagonisms.  The thoughtless English ruffians who wander drunkenly down the streets of foreign towns draped in the Union Jack do not consider that they are manipulated by people who have villas in St. Tropez, speak French and Italian and would never dream of eating the kind of crap they make the poor of their own country eat.  Patriotic piffle.  Those English hooligans should get out and do the Camino.  They should take an education in internationalism.

Internationalism is sane because we find common ground and common purpose when we communicate across national boundaries.  We discover that a country and a culture are not the same thing.  We find that we may have more fellow feeling with someone from France, Peru, Pakistan or Poland than we do with our next door neighbor.  Sure, there are people who spill a lot of ink talking about national characters, but it seems saner to think that geography does not limit or define us; that we share a common humanity; although we have different personalities, we are not made in the image of the states that we happen to have been born into.

Summerhill Democratics, for example, is based in Asturias.  We are working with schools as far afield as Abu Dhabi, Pakistan and Lithuania.  We work within the EU but we can hardly describe ourselves as Europeans because Leonard is Canadian.  Stevie is English but her partner is Peruvian; she has just got back from a year in China.  On our summer camp team Will has spent time in Réunion and Germany, speaks fluent French and German, learnt Catalan before he started learning Spanish and is quickly learning Castellano.  Freya speaks some Palestinian Arabic from her time working in camps there and has recently been in Kenya for her sister’s wedding.  Anna’s closest school friend is in Seoul, Korea and she has many contacts in Japan and Taiwan.  I am not trying to show off.  This is not a list of credentials.  My point is simply that there is no level of patriotic piffle I would stop at and be happy.  I would not stop at the Asturian level, I would not stop at the Spanish level, I would not stop at the European level, I would not stop at the Nato level, and I would not create some phony divide between the East and the West or North and South.

Summerhill School has always been an international school.  Neill’s early experiments were in Austria and Germany; now it has connections around the world.  We want our summer camp to be a truly international experience as well.  There is no reason you could not do a democratic summer camp with just English kids, just Spanish kids, or just Egyptian kids, but the benefits are much greater when people come together and recognize that the patriotic piffle that they have been fed about their national identities really is just that: piffle.

It is a message of hope to the world to say:

Come here and you will all be equal!

On that note I should apologize.  You see, I started this post saying that Jimmy Dick deserves to be better known, and I believe that.  But the Nellie Dick I mentioned in my second breath was an extraordinary woman I really should not have mentioned merely as the wife of Jimmy.  She was born Nellie Ploschansky and at the age of 13 set up her own school.  She grew up in an environment where the adults and the children worked together, trying to live without masters.  She spent her life working for freedom and equality in education.  Those ideals are truly international!

Here is the LibEd website with the link to No Master High or Low.